Have not been feeling the blogging love of late, I fear.  No resolution post (a standby, I know).  I do, however, have A List which may be of interest.  I kept a book log of my reading habits for the second year running.  In defense of the log, I do seem to read more when I’m tracking my reading.  Ninety-two books is not unrespectable, I suppose.  I was hoping to break 100, but this doesn’t count the many online magazines and critical journals I read, nor does it include the many friends with whom I trade work.  There are many words read in 2013 that are unaccounted for here.

A round-up: This year contained more fiction than nonfiction, more books written by friends and colleagues, and fewer terrible writing advice books than in years past.  A few poetry volumes, a fair number of critical works (especially re: fairytale, allegory, and capitalism…which makes sense in terms of how my interests have shifted this year), and a bizarre Stephen King phase that lasted for most of the month of June and for which I can offer zero justification other than that it was summer and King’s nothing if not compulsively readable when the temperature breaks 90 degrees.  I tend to get my recommendations from other blogs I read, and from friends on Facebook: many of the works listed were reccs from Matt Bell, Rahul Kanakia, Kij Johnson, Virginia Konchan, or Nick Mamatas (and I’m sure I’m forgetting people…oh of course, Saskatchewan Review’s unfinished book reviews!).  So for those braver than I who regularly post reviews of what they read, here’s one devoted reader who much appreciates it.  It so helps when deciding which of a million worthy works I ought devote my time to reading. 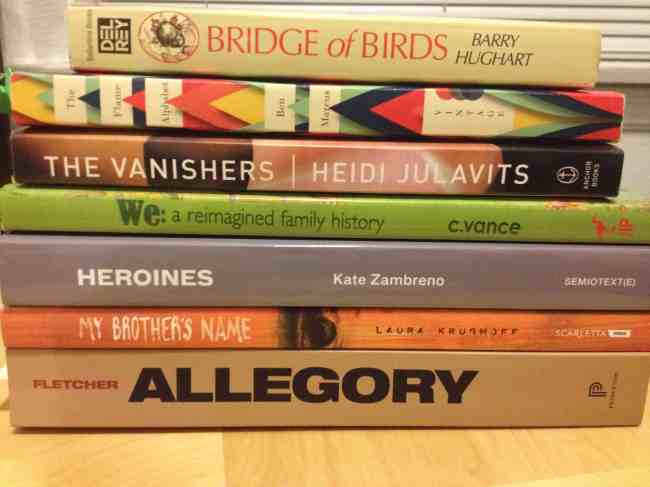 Weird how much this feels like oversharing, like flashing my undergarments, when in fact it’s just my book list.  One’s tastes are private…but of course, since I don’t comment on my reads, those tastes are still mostly concealed.  They’re pretty mundane anyway.  Beige-neutral undergarments, really.

Note: I track haphazardly.  I’m probably missing some books, possibly many.  I may have duplicated some reads from last year (I reread with fair regularity) that are unmarked herein.  Without further preamble, the list:

10. There Once Lived a Girl Who Seduced…

11. In Search Of and Others, Will Ludwigsen

12. The Girl Next Door, Ketchum

17. Shirley Jackson, Come Along with Me

20. Dani Shugart, The Sound of Secrets

31. In the House upon the Dirt… Matt Bell

32. Luthi, Once Upon a Time: on the Nature of Fairytales

33. Luthi, On the Form of Folktale

42. We Are All Completely Beside Ourselves

53. Andy Duncan, The Pottawatomie Giant and Other Stories

56. Lukacs, Theory of the Novel

61. Financial Lives of the Poets

62. The Stars My Destination, Bester

63. The Fault in Our Stars, Greene

66. The Future Is Japanese

71. Propp, Morphology of the Folktale

72. Caliban and the Witch (unfinished)

74. Bettleheim, The Uses of Enchantment

78. Preliminary Materials for a Theory of the Young-Girl

82. George Saunders, The 10th of December

90. Elizabeth Moon, The Speed of Dark